Unlike Copers Cope Farm where we can only guess at the origin of the name, Eden Farm was named after William Eden, First Lord Auckland from 1789, who leased the farmland in 1782 from the landowner Peter Burrell. Farm buildings were already in existence there at Beckenham’s highest point of 175ft but by 1790 William Eden had a mansion built where he could bring his wife Eleanor Elliot and family, eventually numbering 14, 8 girls and 6 boys. Only two were born in Beckenham, George in 1786 and Frances in 1880. The others were born wherever William Eden was carrying out his duties as ambassador in France, Spain, Netherlands and Ireland. William’s brother Robert was governor of Maryland where he lived and died and if the name Eden sets you wondering whether they were related to Anthony Eden, the answer is yes, because Robert Eden was Anthony Eden’s great, great grandfather.

There were two other farms close by that were easily confused. Formerly called Upper Elmers End farm, Eden Park farm was near to the Rising Sun where Stanhope Grove meets Upper Elmers End Rd. A short distance up the road leading to West Wickham was the north lodge of Park farm, the property of Samuel Jones Loyd where the Bethlem Royal Hospital buildings are today. In 1838, Eden Park farm was sold to the Loyds and became part of Park farm.
When Peter Burrell died in 1820, all his property went to auction and Eden farm, renamed as Eden Park, was bought by John Woolley. The Edens no longer lived at Eden Park because William had died in 1814 and Eleanor in 1818 but the Eden Park mansion was leased by others, in particular the solicitor Edward Lawford in the 1830s and 1840s.

The mansion was approached by paths from a lodge where today Whitmore Rd meets Village Way and a second lodge where Eden Park Avenue meets Croydon Rd. Eventually, tenants could not be found for the mansion and when demolished in the early 1900s, it was in advanced state of decay. This entire area was used to build a housing estate in the early 1930s leaving only Crease Park, the site of William’s mansion, saved from the developers by Alderman James Crease who opened it as a play park in 1936. The fields also abutted the land of Kelsey mansion and ran down to where we now see the woodland of the Harvington Estate and the River Beck. Here in about 1834, there were two large houses erected, Eden Lodge and Eden Cottage.

There are plenty of signs of Eden Lodge in the woods today although the house was judged unsafe and demolished nearly 50 years ago. Rows of tall pine trees indicate the drives along which the horses would pull the coaches for the important people who lived there including solicitors and merchants. The old cedar tree is still there shored up with wire netting and concrete.

Parts of the garden walls, railings (as in the picture) and the piggeries can be found in the woods and traces of the brick-built weir across the river that enabled the water to be held back as an ornamental lake.

In this aerial view taken of Eden Lodge in 1946, the house is at four o’clock and the drive can be seen going straight up through the trees to the gate lodge on South Eden Park Rd. Stone Park Ave crossed by Manor Way are the roads on the left with war-time allotments in the centre of the picture. The River Beck winds from right to left marked by the trees, flowing at the backs of the houses to pass under the road into Kelsey Park.

The tithe map of the 1840s states that Benjamin Oakley was the owner of Eden Lodge although it was leased to the tea dealer, John Marshall. Further, the Sun Alliance Insurance project from the Guildhall, London, has a record of Benjamin Oakley insuring a property in Beckenham on 9 January 1834.

Eden Cottage was in the news not long after it was built when two bronze statues owned by Benjamin Oakley were stolen from the garden on 23 November 1835. The statues were between 4 and 6 ft high, one of a Grecian female and the other a dying gladiator. They were worth £100 and a reward of 10 guineas had been offered. The accused, Thomas Jackson from Deptford, was transported for 14 years for the crime. (See the Old Bailey records)

The census records from 1841 to 1901 show a complete occupation of the two ‘Edens’ by wealthy bankers, solicitors, merchants, stockbrokers and engineers with many servants, coachmen and gardeners to keep the combined area of the Lodge and the Cottage in prime condition. John Marshall occupied Eden Lodge from 1841 to 1861 followed by corn factor John Kingsford in 1871, East India merchant Peter Nicolas in 1881 and 1891 and then Hugh Campbell, stockbroker, in 1901. Eden Cottage was occupied by solicitor Ben Hardwick in 1841, followed by West India merchant George Hankey from about 1845 until the 1861 census.

Then Charles Hoare, banker, aged 24 in 1871 and builder of the coach house lived there until 1877 when he inherited Kelsey Manor from his father, Peter Richard Hoare junior, who had owned Kelsey Manor since 1837. Finally, a civil engineer from Chile, Francis Miers, was resident at Eden Cottage from 1881 to 1901 with the Beckenham Directories showing that his wife Susan lived there until about 1917.

In his heart, Charles, Hoare, known as Charlie, was not interested in Banking and his love of horses led him to provide a coach and horses service from Beckenham to Sevenoaks. A coach house with a high pointed roof was constructed at Eden Cottage to accommodate the Sevenoaks coach.

Charlie (see below) married Margaret Baring Short in 1867 and they had five sons, Hugh, Charles, Wilfred, Reginald and Ralph and a daughter, Agatha, all but one while living at Eden Manor. Such was Charlie’s passion for outdoor sports, in particular hunting, that he moved his family to Cirencester where he took part in the Hunt and fell in love with 15 year old Beatie Sumner, a move which caused him to fall out of favour with the local populace and almost put him into prison. His wife left him and he moved away to exile at Binstead near Ryde on the IoW while his wife returned to Beckenham and Kelsey Manor. He and Beatie lived as Mr & Mrs Hoare and had two children, Sybil born 1884 and Robin born 1886. In 1888, Charlie found the 400 ton barque Illovo in the London Docks and proceeded to convert it into a replica of an early 19th century warship renamed the T S Mercury, to be used as a nautical training school for boys.

During this time, Charlie frequently returned to Cirencester to clear his name and Beatie took to dressing as a man with her hair cut short, experiencing all the hardships that were imposed upon the boys. After 7 years at Binstead, Charlie and Beatie moved to Hamble near Southampton where the TS Mercury was anchored mid-river and over a thousand boys were trained over the years. Many left to join the navy, to work in shore establishments, for employment on yachts and to join the army where over 90 went in as bandsmen.

In June 1898, Beatie married the all-round sportsman, Charles Burgess Fry who took over the management of Mercury. He was famous for equalling the world long jump record in 1893 and particularly for his excellence at football and cricket.

They had three children, Charis, Stephen and Faith and it was the two older girls, Sybil and Charis, who helped Beatie run the school in the same severe manner as their mother.

Charlie was left to spend the last decade of his life alone. His wife died at Kelsey Manor in October 1899 and is buried in the family mausoleum at the parish church with her son Hugh who died in 1880 as a result of an accident when he was 12. Beatie died in April 1946, CB Fry in September 1956 and the Mercury finally closed in 1968. 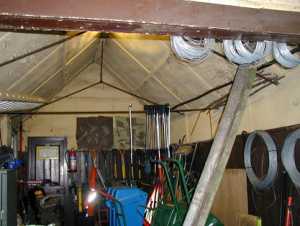 After WWI, both the Eden houses were used by the Frederick Milner Homes for shell shocked soldiers, being visited by Queen Mary in 1931. After WWII, the Beckenham Council took over the Eden houses and their land to become part of the Harvington Estate.

Eden Lodge was left to deteriorate but Eden Cottage, by then known as Eden Manor, was used by Scouts and Guides and was an experimental centre for the Civil Defence. In 1960, since no use could be found for either house, they were both pulled down leaving Charlie Hoare’s coach house to be used as an equipment store.

Until October 2009, the rangers used the site but then the takeover to erect 4 luxury houses was completed and the coach house disappeared in a few hours leaving nothing at all, not even a name, to remind us of Eden Cottage and all its inhabitants.

Charlie Hoare’s collection of ship models and artefacts can be seen at the Greenwich National Maritime Museum. Their story can be found in ‘The Indomitable Beatie’ by Ronald Morris, one of Beatie’s last pupils in 1946.