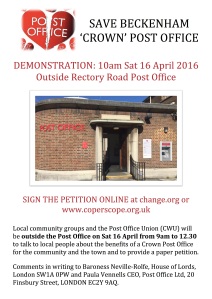 If the Post Office in Rectory Road is not profitable we urge Post Office Ltd to consider moving to a smaller site (there are empty shops in Beckenham High Street) or co-locating in another store rather than rush to give away the franchise to a third party.